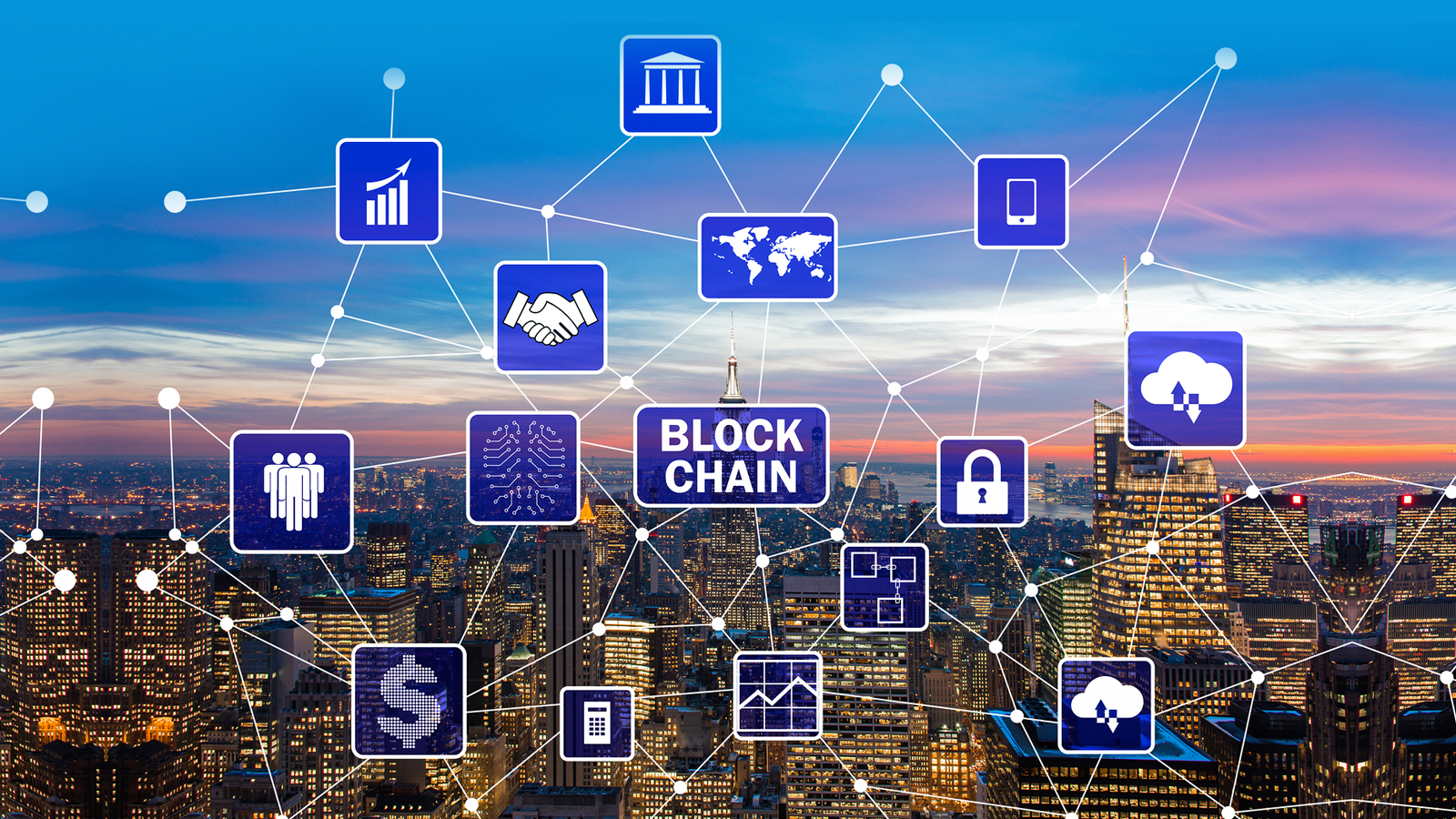 Technology has revolutionized businesses. Take any disruptive technology such as IoT, virtual reality, or cloud, and you will know that each has digitally transformed the world in one way or the other. Like all these technologies, there is a new one that is lately gaining traction. Enter blockchain.

The hype around blockchain development is unsurprising right now. The reason for the hype is because cryptocurrencies and many real-world applications are built on this revolutionary technology. However, despite the technology’s rise, a few people cannot differentiate between Bitcoin and blockchain; that is exactly when things get confusing, so let us clear the air in this regard first.

The Difference Between Bitcoin And Blockchain

Bitcoin, a peer-to-peer transaction system and the world’s first crypto coin, was developed by Satoshi Nakamoto. The aim of this cryptocurrency was to simplify transactions by avoiding the need of having government control. This groundbreaking cryptocurrency was built over blockchain. This radical technology has enabled a number of digital data sets to be completely distributed without getting them copied.

The Blockchain network enables to trade any asset and track its value, virtually. Commonly known as a distributed, shared ledger, this ecosystem lets users record the transactions and even track the value of all the intangible assets including patents. On blockchain, every piece of data will have just a single owner.

Put simply, blockchain will define a robust protocol that enables two individuals to transact with each other in a peer-to-peer network online. So whenever you will transfer value from an account to another over blockchain, you trust the system to make a valid transaction authentically. That trust is built by blockchain because of a number of reasons; let us view each of these reasons, now.

The Evolution Of Blockchain And The Rise Of A Decentralized Revolution

From barter to cash, the way we transact has changed a lot. However, every mode of transactions has some common problems ranging from payment security to the presence of middlemen and not to mention the rising cost of intermediaries. So, for overcoming the existing shortcomings, a sustainable, reliable, secure, fast payment network was needed. Also, this ecosystem was to be completely decentralized for eliminating the reliance on intermediaries. That was how blockchain was born.

Wei Dai, one of the first notable pioneers, introduced the idea of creating b-money by solving computational puzzles and following a decentralized consensus. However, the proposal, in itself, was quite vague when it came to implementing it. Hal Finney, in 2005, introduced the idea of building a system on “reusable proofs of work.” This system used all the concepts of b-money alongside Adam Back’s Hashcash puzzles that were computationally difficult concepts of crypto coins. However, Finney’s system was big on the idea of maintaining trusted, centralized backend systems.

After that, in 2009, finally came a white paper from the visionary Satoshi Nakamoto who introduced the idea of Bitcoin that was powered by blockchain. The white paper outlined all the details needed by a protocol to build a completely decentralized currency that operates on an end-to-end trustless network. This network was controlled by individuals who managed a number of nodes to process transactions and to make sure that security and trust are maintained.

Immutability Is The Ultimate Priority

Blockchain makes sure that the stored data is managed extremely well. Having immutability as its core characteristic, blockchain has made it almost next to impossible to alter any data set stored on the network. If, however, the data requires any alteration due to an error, then a new transaction will be recorded.

A hash is just a one-way function that improves the decentralized system’s usability. This function’s working includes taking a specific input and running a full-fledged algorithm on it. By executing the algorithm, the system will produce a unique digital output having a fixed length. This output is known as a hash code or hash or hash value or digest. The output’s length is always fixed or smaller than the input’s. Whenever the input gets changed, the related hash will be changed to make the data unique. The science powering the hash functions will ensure that there will be no one way to change or edit the stored digital content.

The security of nearly all the existing transaction systems has been breached by identity thefts and frauds. However, blockchain’s decentralization is enabled by a digital ID that is unique for every single transaction. Through this uniqueness, a transaction happening in this ecosystem will let its customers have complete control over their personal information.

A blockchain is essentially a chain of digital blocks that store the records of transactions. Each block of the chain is connected with the block preceding and succeeding it, and thus the information is stored in multiple blocks of the chain . This makes it extremely difficult to tamper the stored information as the hacker will have to change the block containing the information as well as numerous others linked to it. If this doesn’t come much as a deterrent, a blockchain offers more security measures that are inherently inbuilt.

The records in the blockchain are made secure through the means of cryptography. Network participants are provided their private keys that serve as personal digital signature. If the record is manipulated in any way, the digital signature will become invalid and the peer network will know right away that some manipulation is done to the record of transaction. This early notification will prevent further damage to the transaction records.

Blockchain is regarded as a first-class example of highly effective P2P technology. In a P2P network, nodes or interconnected peers will share the resources with each other without relying on an individual centralized admin system or server. Through this ecosystem, there will never be any middleman who is taking the cut. So, on such a network, the cost of the transactions automatically comes down. Top companies such as Zipcar and Airbnb have leveraged the benefits of this network quite effectively.

A Distributed Ledger To Increase Transparency

As a distributed ledger, blockchain is open to everyone since the technology can protect data from hacking or any other form of cybercrimes. In the most basic words, a distributed ledger is quite similar to an accounting ledger. Just one fact makes blockchain different from a fully formed accounting ledger; that is the presence of a middleman. In case of blockchain, the distributed ledger will be linked to a huge network of computers and all the essential data sets will be stored in the ledger itself. A copy of that data will be sent to every node present on the network. So whenever someone wants to tamper or change the data, they will need to alter it on every computer running on the network.

Merkle tree is the core component of blockchain, and that is what ensures the whole network’s data integrity. There are many transactions happening on the blockchain, and each one of them will have their own data. Let us clarify the whole thing through an example. In the figure below, L4, L3, L2, and L1 are four separate transactions. The data sets related to all the transactions will be passed via a proper hash function; that is when every single transaction will generate its own single transaction. Now, let us say that the hash related to every transaction is named as Hash (L4), Hash (L3), Hash (L2), and Hash (L1). Further, a pair of these hashes will be again passed via a hash function. This process will create a totally unique hash for every pair; in the figure below, see the pair of Hash 1 and Hash 0 gets a new hash. This process is called as the hashes of hashes. Finally, the last pair of the hash will be passed through a complete hash function and will create an individual hash creating a robust Merkle tree. That is exactly how a Merkle tree will detect any change happening on any data set within the transaction happening on a block. 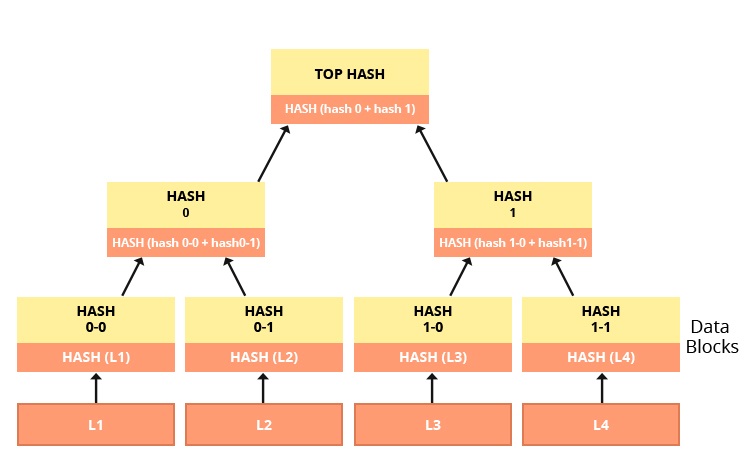 Blockchain is often appreciated for its speed, and that is why every single transaction over the network will be streamlined and fast. The biggest contributor to the network’s speed is that the information on blockchain may be leveraged at different instances without the need of recapturing it.

Bring Down The Total Cost

As per a report published by Accenture, blockchain technology will reduce the infrastructural cost for the world’s biggest investment banks by 30 percent. And that is just one example because the technology has serious potential to disrupt a number of industries in unimaginable ways.

Overall, blockchain will provide an ideal solution for businesses that are looking forward to streamlining their entire digital networks. As per specialists of many industries, blockchain will be a complete revolution that will transform the global economy in new ways. So want to leverage blockchain in a way that is unique to your business? If so, associate with a technology partner that optimizes different growth channels to unlock the full potential of blockchain for your businesses.