How iOS 14 Update Will Transform The Apple App Development Landscape 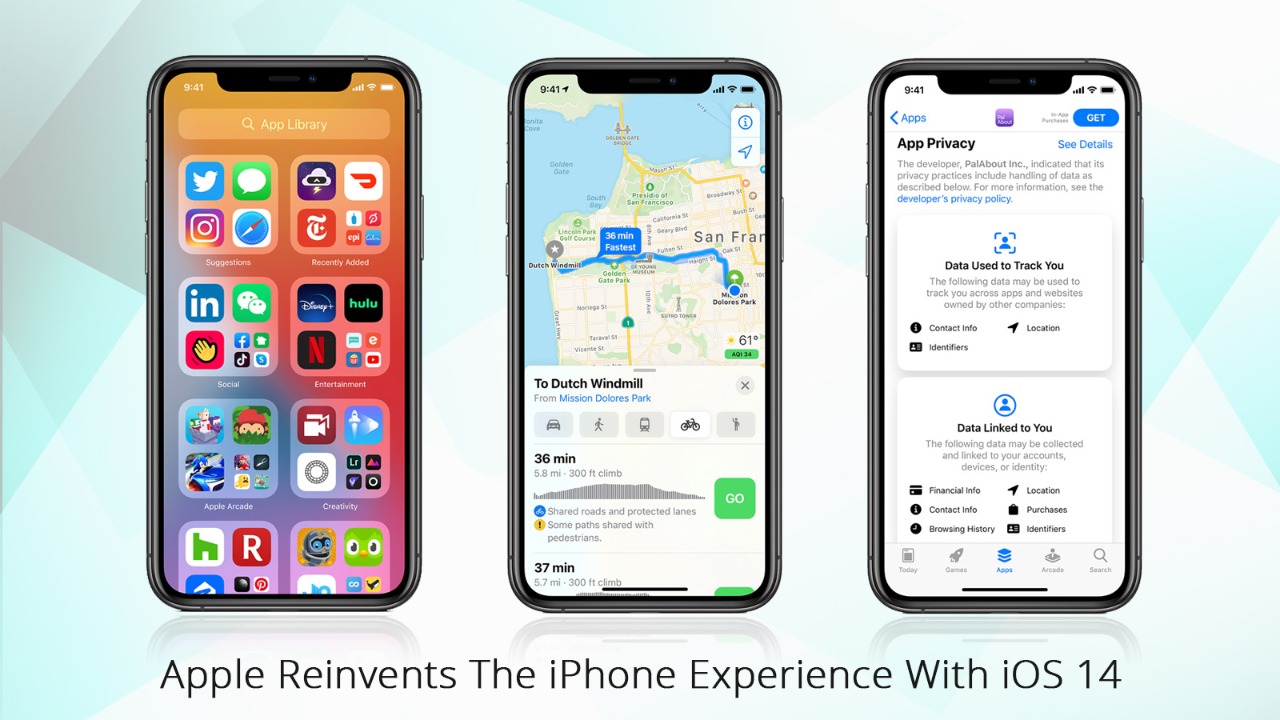 This year’s Apple Worldwide Developer Conference, or WWDC, brought massive upgrades for developers and gave the world a peek at the transformed iOS 14 landscape. At a glance, the conference included the low-down on Apple’s next-gen operating system for iPhones and iPod Touch (7-gen). The iOS 14 version has been open for developers to beta-test now; and the final, polished iOS 14 is expected to come to eligible iPhones and iPods in September this year.

No doubt, Apple’s iOS 14 is one of the biggest upgrades that have happened in the world of iOS since it launched for the first time in June 2007. In this post, we will list some of the most notable upgrades of the latest iOS iteration and even discover how it will change the overall iOS application development ecosystem.

The iOS 14 is a big update that has revamped the home screen design and added some game-changing features including the upgrades to the existing apps and Siri modifications. Along with that, some of the tweaks in the latest version of the iOS have even streamlined the entire iOS interface from start to finish.

The Support For Customized Widgets

First of all, iOS 14 brings to the table generous support for widgets. Now, widgets can be easily dragged from the Today screen on the right of your iPhone. And that dragged widget can be pinned in a range of sizes anywhere on your home screens.

Speaking of widgets, we would like to mention that there is a dedicated Smart Stack feature this time. According to this feature, the iOS will flex its AI and ML muscles to make sure that the right widget is surfaced on the screen depending on the device owner’s location, activity, and time.

The new iOS variant allows that every home screen page will now display widgets that are customized for travel, sports, work, and a lot more. Till iOS 13 version, the Today section housed all the widgets, but that is also redesigned now. To top it all off, there is a dedicated widget gallery where the users can pick new widgets and customize them.

The All-New App Library Is Here

Swiping to the end of the home screen pages, the user will also get a dedicated App Library where the iOS arranges all the apps present on the smartphone. The newly designed App Library will help the smartphone user to get an organized view of every app on the phone; in the App Library, the iOS will segregate all the applications in folders. That way, finding any one of them will be quick and convenient.

For example, all the games will be present in one folder; on the other hand, the productivity apps will go in a separate folder. And whenever there is a new app downloaded, it can be kept in the App Library so that your home screen looks cleaner.

Apple Maps app is also overhauled with the newest iOS update. The new Maps app will now provide a convenient route for not only car owners but also travelers who are riding a bike. The Maps will now show in real time about the busyness of a route. Not just that, the revamped app will show whether the users will face any stairwells or challenging hills on the way to their destination.

From the usability perspective, this update brings a lot of important features while addressing the challenges faced by disabled people too. Additionally, the new Maps will bring the information related to charging stops for topping up the battery of electric vehicles. All in all, with the new Maps, moving across cities and even countries will become convenient.

App Clips Will Redefine How iOS Apps Are Downloaded

Apple brings App Clips with iOS 14. According to the new feature, the users will be able to take advantage of the app without actually getting the full app from the App Store. App Clips will be able to let you do multiple things such as purchasing a coffee, renting a scooter, booking a table in a restaurant, and filling the parking meter by just scanning a code.

As per Apple, App Clips will help users unlock a small part of the entire app experience without having to download the whole app. This way, the users will be able to satisfy their needs at the moment without spending data on downloading the entire app. App Clips will work by using native-designed NFC tags, App Clip codes, and QR codes that can be shared from Safari or in Messages.

iOS 14 is not just about aesthetic enhancements and functional changes. But it is even about iOS’s beefed-up security protocols and privacy options. The updated privacy protection features need the developers to ask for permission before accessing any device on a local network. Other than that, there are countless other options that can help limit access to the photos or data. Besides, iOS 14 will even help users control the preciseness of the location that they want to share with a specific app.

If that was not enough, every app is required to get user permission before it tracks them through websites. And every time an app access the iPhone’s camera or microphone, a colored dot will be shown on the left corner of the phone’s screen. Apple will also bring a Safari password monitoring system that will let the users know if any of the saved passwords is involved in an instance of a data breach.

Besides, there are multiple additions in the latest version of the iOS. Here, we have covered some important updates that will influence the way iOS apps are developed from scratch. Now, let us dive deep into how the newest version of iOS will change app development.

The newly launched widgets will help iOS developers to level up the user experience of the app. How? The developers can use the widgets for providing one-touch access to relevant app content. The widgets will even help in accelerating and simplifying the way in-app navigation works.

The developers must design a widget in a way that it automatically updates with time so that the users experience fresh data every time they view it. Designing and deploying a configurable widget is no small feat, but Apple is providing detailed explanations and documentation that will do the hand-holding as far as widget development goes.

The Rise Of App Clips

App Clips have raised some eyebrows in the iOS app development community. After all, the whole purpose of App Clips is to not let users download the whole version of an app. And this is particularly not a good sign if the development team benchmarks its success against the total number of downloads.

This way, the whole interaction with the app can be fast and smooth. Which is why, the developers who prioritize enhancing the user experience must find newer and more powerful ways to develop iOS apps for App Clips. To start with, a business must make sure the development team designs a lighter version of the app solution for App Clips.

Besides, the development team will also have to find out the right technology through which App Clips will be launched; these technological building blocks generally include tapping into location-based suggestions from Maps or Siri, scanning an NFC tag, and the like. While developing the lighter version of an app for App Clips, the developers must make sure to include the most important app functionalities ranging from in-app purchases to the option to drop feedback and document opening.

With the revamped Apple Maps, a service provider will get numerous opportunities to serve its clients through its app in a more personalized way. The new Maps delivers the capability of advanced geolocation for building app solutions that serve the customers better and faster.

A case in point: If a business knows that its targeted customers are likely to go on new routes riding their bicycles, then it may open up new bike-renting spots on a specific location that is experiencing heavy footfall. Here is one more example: Many other businesses can capitalize on this opportunity to come up with the spots that offer repair services and spear parts for bikes. Put simply, the new Maps, too, bring a host of business opportunities if the idea gets the required attention.

The Way Forward For Live Apps After iOS 14 Launches

If a business has an enterprise-grade iOS solution, it is advised to tweak it for improving the user experience once the iOS 14 formally comes to every eligible Apple device. The best thing will be for the business to ask its development team to review the app code for adding some new features that will be in sync with the latest iOS version. The bottom line is that the iOS app must be able to follow the new trends for improving the user experience.

Will it take long to update the iOS app in question and bring in some excitingly new features? It basically depends on the app’s complexity; the major time is spent on reviewing the app code and then finding a way of introducing new features. The time to revamp an iOS application will also depend on the type of options an enterprise would like to introduce.

One other aspect to factor in while making the upgrades to an iOS app is the cost. The total cost of changing an existing iOS app so that it syncs well with the latest iOS upgrade depends on the number of development hours the project will consume. That means the price of making the changes to the present iOS solution may vary.

Readying an already-live app to make the most of the new iOS upgrade takes time and effort. Not have that much time or expertise to deal with the overwhelming app upgrade cycle alone? In that case, it makes complete sense to get a trusted iOS app development partner that has helped enterprises launch best-in-class iOS apps with the latest features and an intuitive user interface.

At Flexsin, we have a team of iOS developers with the capability to turn heritage portfolios into flexible and modular iOS assets. Our team is supported by cutting-edge iOS app development frameworks that accelerate the solution’s time to market so that it delivers a higher level of customer engagement.

Because of the deep expertise in building immersive iOS app solutions, it has the capability to rapidly manage the requests for adding newer functionalities in the app in no time. Whether it is an iOS app’s modernization for supporting enterprise agility or deploying newer APIs or microservices, we know it all.

Discover more about our iOS app development initiatives and how our team can help your vision become a live iOS solution by connecting with our sales reps today.