How Augmented Reality And Virtual Reality Can Help In Brand Experiences 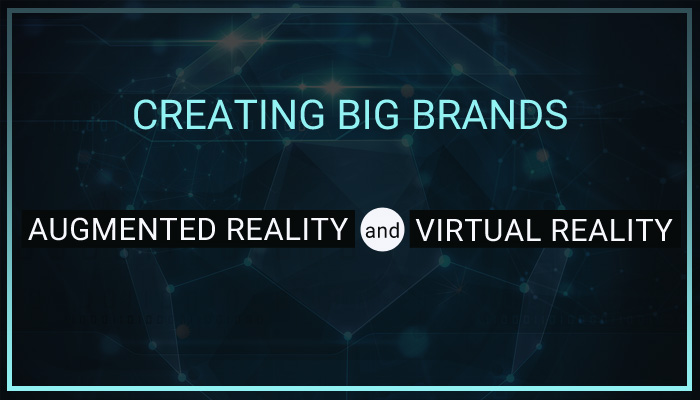 Augmented Reality (AR) and Virtual Reality (VR) may confuse the less informed due to their similar functionalities but they are two distinct technologies that are used for different purposes.

AR utilizes your mobile or tablet’s camera and puts a layer of data, content and pictures to present you an augmented perspective of the reality.

In fact, we have 4 types of ARs available today:

This position based AR utilizes a GPS, compass, gyroscope and accelerometer to determine what AR content you will get in a particular area. This AR is typically used to produce maps and directions.

Also known as Image Recognition, it requires special visual object and a camera to scan it. A marker initiates digital animations for users to view, allowing images in a magazine to turn into 3D objects.

Synthetic light is projected on physical surfaces and user can even interact with it. It detects a user’s interaction with a projection by its alterations. The AR is made good use of in holograms that we all have seen.

It replaces an original view with an augmented one. Leading furniture retailer IKEA’s Catalog app is a good example that allows the users to place the virtual furniture items of the company in their rooms. Object recognition is the key for this AR to work.

Augmented Reality makes use of digitally generated perception of information across visual, auditory, hepatic and somatosensory modalities. AR developers create pictures and sounds to be mixed with the real world, while VR developers create their own reality which is computer generated and driven.

Augmented reality adds more to reality. It’s a mix of real and virtual worlds, and unlike VR, you will be able to distinguish the real and virtual. Pokemon Go is a good example of AR game that presents you a live view in a virtual view by bringing the game’s characters Pikachu and Charizard onto your front lawn. Pokemon Go is an excellent example of AR taking center stage and finding mass market acceptance.

A VR headset creates a 3D immersive environment for the users, and to achieve this, some pre-requisites need to be met, like minimum frame rate (the rate at which GPU can process images per second) of 60 fps and minimum 100 degree field of view (FOV), though FOV should be 180 degrees for best outcomes. FOV is characterized by the extent to which the display can support eye and head movement.

VR is typically delivered by a headset that transposes you to some other place by leaving you blind to your current world, while AR augments your current state of presence, and is often delivered with clear visors.

With virtual reality, you can investigate the places you have never been to, like moving on the surface of Mars, swimming among the sharks in deep oceans, or standing on the peak of Mount Everest.

Some of the most popular VR devices and standalone headsets include the below ones:

How do they work together?

In virtual reality, you are completely immersed in a digital world often created by your head mounted display (HMD) while AR is the digital overlay of reality that we live in day to day. AR and VR do not operate independently and are often blended together to obtain even more immersive experiences. For example, haptic feedback AR in which vibrations and sensations are added to interact with graphics is commonly used with VR settings make the experience more lifelike that could be felt by touching the objects.

How do they differ?

While VR is more immersive, AR provides more freedom to the user. The key differences between AR and VR are summarized below in a tabular form for easy comparison of the features, functionalities and capabilities of the two technologies:

While both AR and VR are gaining momentum, the technologies are still confined to a minority of tech enthusiasts as they are hindered by our current inability to render 3D environments in real-time. The more life-like these animated realities evolve to deliver their environment in the near future, the more mainstream society will be able to embrace their potential in gaming, communication and brand experiences.

Prashant
He has over 10 years of experience in project management, product conceptualization and IT consulting. He has been a key member of several successful startups and has got good grasp over web & mobile domain. As a consultant, he has worked for Fortune 100/500 companies. He has extensive expertise in IoT, AI, Big Data, and enterprise solutions. Prashant is a business savvy guy with a knack on markets, customer needs and business goals that drive sound decisions.
View All Post