Deal & Campaign app is an application which allows users i.e. the retailers to promote their deals and the campaigns over the app so that the other users i.e. the customers will come to know about the latest deals and campaign and can be able to avail these services.

How Deal and Campaign App Works?
Users can download the application which is available on iTunes store / Google play store . The app is created with a simple goal, helping users to easily share the details regarding the deals and the campaigns. As this application is developed with iBeacon Technology so if user will pass nearby the retail shop and their Bluetooth is enabled then they will be able to get the notification about the deals and the campaigns.

Solution
The concept was very unique and our technical team has faced challenges in integrating the iBeacon technology in the app. The other challenges faced were the product and user management according to the deals and the campaigns offered by the retails store and to deliver unified user experience.

This application i.e. Deal and Campaign app using iBeacon technology was developed for iOS and Android platforms. So, we needed to assign dedicated team for both platforms i.e. Android and iOS. The team has been consistently monitored by the Project Manager to make the application live and as per the client expectation.

"GREAT JOB BY FLEXSIN! Even though the project was really complex and there were times that it looks..
Marcus Cheong
Partner Profox, Singapore
Success
The team has been continuously researched to make the features compatible as per the desired frameworks and technologies. At the end, team has successfully implemented the feature of iBeacon technology which allows the users to get the notification about the deals and the campaigns when a user who has already installed this app and if his/her Bluetooth is enabled whenever they visit near the store.

Flexsin has successfully developed this application as per the client requirements and delivered it successfully to the client. Client is extremely happy with the end result and the end product we delivered is a Deal and Campaign App where the users i.e. Retail store owners would be able to post the latest deals and campaign and other users i.e. the customers will be able to get the notification about these offers and all this will be done by using the iBeacon Technology. 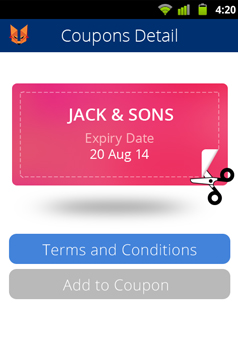 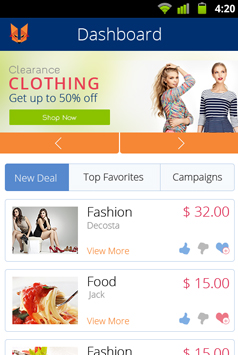 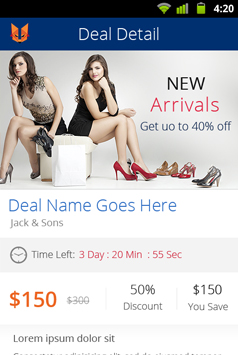 Mobile Application To Navigate Nearby Restaurants and Pubs
Since the marketplace was highly competitive, the client wanted to create a differentiator that would empower it to outperform its competitors. For this purpose, the client envisioned to launch a fully functional application that was supposed to meet...
Full Case Study

User Tracking App for Logistics Company
The client wanted to boost its business and reach a new market of prospects by launching its mobile application. For making this move as smooth as possible, the enterprise had to design an intuitive application that would streamline the existing deli...
Full Case Study

Online Mobile Platform for Education Staffing Needs
The client approached us with their need to interlink the schools and educators who are in need quality education. The client wanted to run a multi-location recruiting firm that was dedicated to improve the community they served and create a remarkab...
Full Case Study

Geo-Location Based Club and Performer Management- iOS and Android App
Client approached us to develop an App that helps users to connect to their favourite performer, bartender and gentlemen's club right in their fingertips. The party animals have their own way to enjoy life - Then why not help them be smarter and ea...
Full Case Study

Geo-Location Based Lifestyle and Surfing- iOS App
Client approached us design an app that could help surfing enthusiasts to find a fellow surfer, a friend, coach and photographer just in a matter of a few taps on their mobile display. Our team was instructed to keep the UI simple, yet highly intui...
Full Case Study

Geo-Location Based Social Events, Birthday Parties Invitation and Gift Management iOS and Android App
Client approaches us to design and develop an app like HUM-BRINDE for iOS, Android and web platforms. The idea behind developing an app like this was to help users to check-in a venue to celebrate their birthday, send across gifts (beer) and also c...
Full Case Study

Geo- Location Based Social Problems Solve Cross Platform- iOS and Android App
Client approached us with a requirement for a crossplatform app to be used on both iOS and Android platforms. The content of the app, as client asked us of, was to be social incidient sharing, (mentioning the location related to the subject) and peop...
Full Case Study

Bluetooth and Wi-Fi Data Transmitter and Receiver Platform
Client approached us to design and develop an app that serves as an easy platform when it comes to sharing media files or data from one device to another. The app will work when connected to Wi-Fi and once the connection is established, users will ...
Full Case Study
Want to start a project? Let's Consult