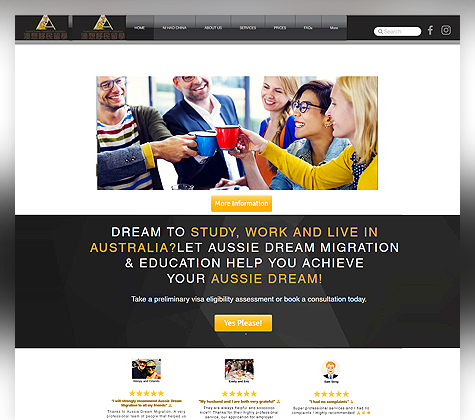 The Folks at Flexsin who handle our account are extremely responsive. They provided an excellent service and guidance to us at all levels. I must say, Flexsin is a remarkable agency I have ever had.

Aussie Dream Migration & Education are the Australian immigration consultant. Offer one-stop services from document compilation to visa application submission and complicatedly follow through the whole process on their client behalf.

Without a feasible marketing strategy, business would eventually fail due to the absence of new customers. All efforts may be for nothing no matter the quality of services. Therefore, it was necessary to put time and effort into this mission, utilization of a sales funnel and generate leads on the website. So a challenge was to increase the number of visitors on the site.

Ã¯Â¿Â½ Conversion of Leads into Prospects, Prospects into Customers

In order to increase leads, or engage more and more visitors, who landed on the website either by chance or in need of services on the landing page. We designed an interactive form and call-to-Action (CTA) clicks. This was linked up with a hook-like offering a free online test in exchange for the visitors' name and email address.

The most value we added is through an on-going competitive analysis of AusdreamsÃ¯Â¿Â½s and social media performance by making real-time changes to their SMM strategy to make sure they have the optimum ROI possible.

We understood that AusdreamsÃ¯Â¿Â½s needed to leverage niche platforms for their business. Our SMO strategists built the strategy based on the exact needs and chose social media, a virtual platform for social engagement and interaction. We executed the social media plan to strengthen their brand and generate the required action from their prospects.

We designed a best SMM strategy using organic and paid campaign on social sites like Facebook and Google AdWord respectively all of which cater to a global audience.

For the split testing, we designed and ran several campaigns; containing a variation of ads, on Facebook that targeted at specific groups of visitors, delivered a more tailored and personalized experience.

55K mentions on various social media, and 64K impressions on Twitter, around 78K reached on Facebook; more than 34K liked and followed; on Pinterest they got 15.5K likes and followed by users.

We dealt with each of these challenges; offer a clear and optimum solution that was implemented quickly, strengthening the business overall and increasing the ROI.