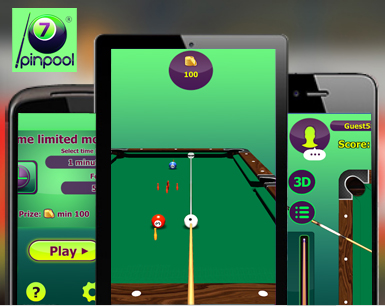 Flexsin were professional, timely and cost-effective. I am so happy I made the investment with Flexsin. I would recommend Flexsin to anyone who wants their business to grow and reputed. Your Team Rocks!
Anna Aizenberg CEO, 7pinpool

7pinpool.com is an Illinois, USA based online game store. Developed and launched a billiard game app, known as 7pinpool. It gives the opportunity to play with hundreds of players simultaneously.

While the classical billiard or snooker player is losing his patience because the opponent is shooting every ball into the pocket, the 7 Pin Pool players are enjoying every shot. This game won't endure for hours if unlucky players can't shoot the ball. There is a time-limited mode, so maximum in 10 minutes the player can beat everybody or lose, return and try again. It's is quick, easy and free to download a game app.

Promotion and Awareness among the Users

A client, Arkady Aizenberg, has launched a newly developed free mobile app with the name of 7pinpool, but due to lack of awareness, users were able to neither recognize nor recall the app. Brought awareness about the mobile app among the users was the big challenge. It was necessary to devise some social media marketing strategies that make an app to stand out from the crowd of thousands of Apps.

People download apps every day, even before enjoying that cup of coffee each morning; chances are they already have turned to a mobile app to start a day. Whether it's finding a way to a meeting, logging fitness routine, or playing games, watch the video and much more.

However, a 7pinpool game app was free finely tuned and functional mobile app, but creating an app doesn't necessarily mean that it will drive large numbers of downloads and become a household name. So, another challenge was to increase the number of users to download the app.

A great way to promote mobile app is through the competitive analyses of 7pinpool's Social media performance by making real-time changes in the SMM strategy.

We understood that 7pinpool's needed to drive initial awareness and reach users who are using or searching for similar apps. Our SMM professionals built the strategy based on the exact needs and chose a social site for engagement and interaction with the app users. We executed the social media plan and brought the awareness and generate the required action from app users. We quite successfully promoted and ran campaigns via Facebook.

In order to effectively optimize the app to drive more downloads. We designed an optimum ASO strategy for 7pinpool's using several paid campaigns, universal app campaign (UAC campaign) on Facebook and Google Adwords. All of which cater to a global audience, increase the visibility and rank of the mobile app in the Google play store.

For the split testing, we designed and ran several campaigns; containing a variation of ads, on Facebook that targeted at specific groups of visitors, delivered a more tailored and personalized experience.

7pinpool's connected with a number of different audience groups during the campaign. As a result of this campaign, 7pinpool's gained more than more than thousands of downloads within a month.

43K mentions on various social media, and 94K impressions on Twitter, around 84K reached on Facebook; more than 32K liked and followed; on Pinterest they got 11.5K likes and followed by users.

We dealt with each of these challenges; offer a clear and optimum solution that was implemented quickly, strengthening the business overall and increasing the ROI.